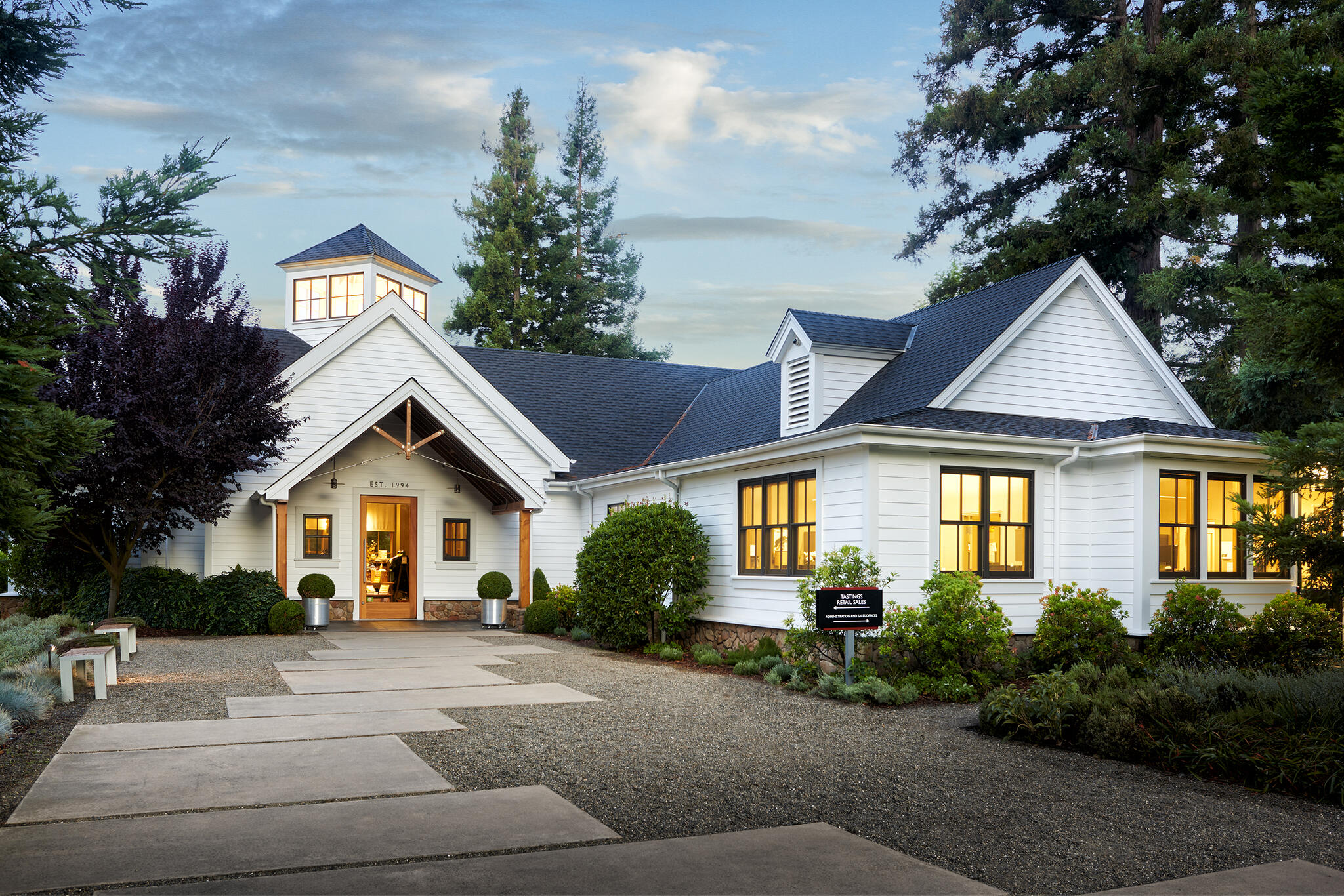 Opened to the public in the fall of 2005, the Paraduxx winemaking facility is on the Silverado Trail in the Yountville appellation of Napa Valley. The property includes a purposebuilt, blend-focused winery, a barrel storage facility, and the luxurious Vineyard House for hospitality events-all of which were designed by Baum Thornley Architects LLP of San Francisco. Overall facility design was influenced by the historic farmstead enclaves found throughout the Napa Valley.

THE PARADUXX WINERY
The dramatic centerpiece of the Paraduxx Winery is a unique 10-sided fermentation facility. This distinctive decagon structure is an evolutionary reinterpretation of the area's traditional round barns. Although designed to be aesthetically appealing, this building houses a highly efficient, state-of-the-art winemaking facility.

Upon its completion, Dan Duckhorn, chairman of the board and founder of Duckhorn Wine Company, commented, "The creation of a separate winery for Paraduxx is the realization of a long-standing dream. In addition to having a hospitality center where visitors can taste the wines, the highly efficient layout of the winery will allow us to take the quality of our Paraduxx blends to an even higher level."

From the outside, the Vineyard House is a fresh take on a typical Napa Valley farmhouse, with a sweeping covered veranda overlooking the winery and the surrounding vineyard. Inside, natural light has been combined with exposed beams, contemporary finishes and comfortable furnishings to create an airy and inviting tasting environment. Our tasting experiences feature an array of innovative blends from the Paraduxx portfolio, as well as focused vertical tastings of our Paraduxx Z for club members, all served in Riedel's artful stemless 'O' glassware. Offered by appointment, our relaxing seated wine tastings are complemented by an array of cheeses.

PARADUXX NAPA VALLEY RED WINES
Since being founded in 1994, Paraduxx has earned acclaim as the only winery solely devoted to stylish Napa Valley blends. Artfully crafted to appeal to the modern palate, the visionary blends of the Paraduxx portfolio have established a reputation for their bold, expressive character and their food-friendly sophistication.

Every great tradition begins as an innovation. Duckhorn Wine Company originally created Paraduxx to allow its winemakers the freedom to explore other styles without detracting from Duckhorn Vineyards' focus on Bordeaux varietals. In 1994, Paraduxx sourced 4 tons of Zinfandel from the 100-year-old vines of Napa's Korte Vineyard. This Zinfandel was blended with Duckhorn Vineyards' own estate Cabernet Sauvignon, along with smaller amounts of Merlot and Petite Sirah to create the first Paraduxx vintage.

All of the wines in the Paraduxx portfolio are made in a state-of-the art winery that was unveiled in 2005. The centerpiece of the Paraduxx winery is a unique 10-sided fermentation building inspired by traditional round barns. Flanking the fermentation building are two symmetrical barrel cellars, partially set below grade to allow gravity flow of the fermented wine to oak barrels for aging. The luxuriously appointed Paraduxx Vineyard House welcomes guests for an array of intimate sit-down tasting experiences.

From the only winery devoted to stylish Napa Valley blends, the Paraduxx Proprietary Red Wine is a bold and expressive blend crafted to satisfy the modern palate. It has rich, full fruit flavors and soft, elegant tannins.

Our Vineyard Series is a collection of limited-produced wines that offer their own inspired variations on the contemporary and innovative style of our Paraduxx red blends. This blend of Cabernet Sauvignon and Sangiovese comes from the high slopes of Atlas Peak, where temperatures can be up to 10 degrees cooler than the valley floor. This ensures long, even ripening, yielding an elegantly textured wine with expressive layers of cherry, lavender and forest floor.

Our Vineyard Series is a collection of limited-production wines that offer their own inspired variations on the contemporary and innovative style of our Paraduxx red blends. This blend of Cabernet Sauvignon paired with Zinfandel originates exclusively from the rocky soils of our Rector Creek Vineyard, which surrounds the Paraduxx winery.

To craft this crisp and compelling Rosé, we focused on vineyards within the coolest parts of the Napa Valley, farming select blocks specifically to make this wine. To ensure refreshing acidity and vivid aromatics, we harvested this fruit earlier and aged it entirely in stainless steel. The result is a bone dry Rosé, with alluring red berry layers, as well as notes of citrus, stone fruit and minerality.

Building on the Paraduxx tradition of artful blending, this limited-production wine was inspired by the great wines of Côte-Rôtie, where Syrah and Viognier are traditionally co-fermented to make a beautifully aromatic wine. The result is a wine that brings together the savory meat, smoke and leather flavors of Syrah with the enticing floral aromatic of Viognier.