On the weekend they married, Betty and Paul Woolls purchased a “cattle ranch” located on the crest of a Mt. Veeder hill. This open field had been owned by the same family since 1885. When the drilling team struck water, the decision became easy to plant 30 acres. These vines now enjoy beautiful views of Mt. Veeder to the west and Napa to the east. Also located on the site stood a very old Oak tree. The tree seemed perfect to become the label of Progeny. Soon the wines coming from Woolls Ranch will reflect the excitement of the whirlwind weekend when the two new projects began simultaneously. A marriage and a new wine; what a perfect combination.


The planting required overcoming several hurdles. First, the land needed vineyard roads, nine acres of them. In fact, the road leading to the vineyard site was so steep that it could not be navigated during the winter rainy season. With the help of long-time friend Kelly Pridmore and his very able crew, the logistics challenges smoothed into one of the most beautiful vineyard layouts in the Napa Valley. Undulating hills that will gracefully encourage the growth of magnificent vines. This part of the development also provided the opportunity for some young grandsons to “drive” several large pieces of earth-moving equipment. At the end of that first year of work, we closed the site before the rains began. The vineyard crew hand spread hundreds of tons of straw so that the fields would be protected from erosion until spring.


When the rains stopped, planting began. While the predominant varietal by far is Cabernet Sauvignon, we did include some of the other Bordeaux blenders. We also grow Merlot, Malbec, Cabernet Franc and St. Macaire. Oh, and tucked away in some quiet corners are a few Rhone blending varietals-Grenache, Mourvedre, and Counoise on the red side, Roussanne, Marsanne, Vigonier, and Grenache Blanc on the white. Should be some small quantity gems coming during the next few years.


Fortunately, we owned another wonderful vineyard on Mt. Veeder which we now call “Betty’s Vineyard.” That place provided much needed solstice for Betty during difficult periods when life presented challenges. The views of the Valley from that spot are beautiful indeed. In fact, when Betty and Paul began dating, it was the first place they went for a picnic. Look what came of that!``


The first Progeny wine began in that spectacular location. We decided to launch Progeny with a hand selected, best vineyard block wine that we aged 30 months in new French oak, followed by more than two years in the bottle. Over time, we hope that you enjoy this very limited production wine which we believe will age gracefully for years to come. 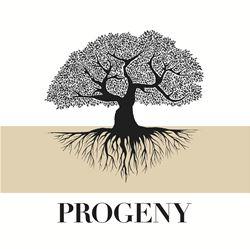