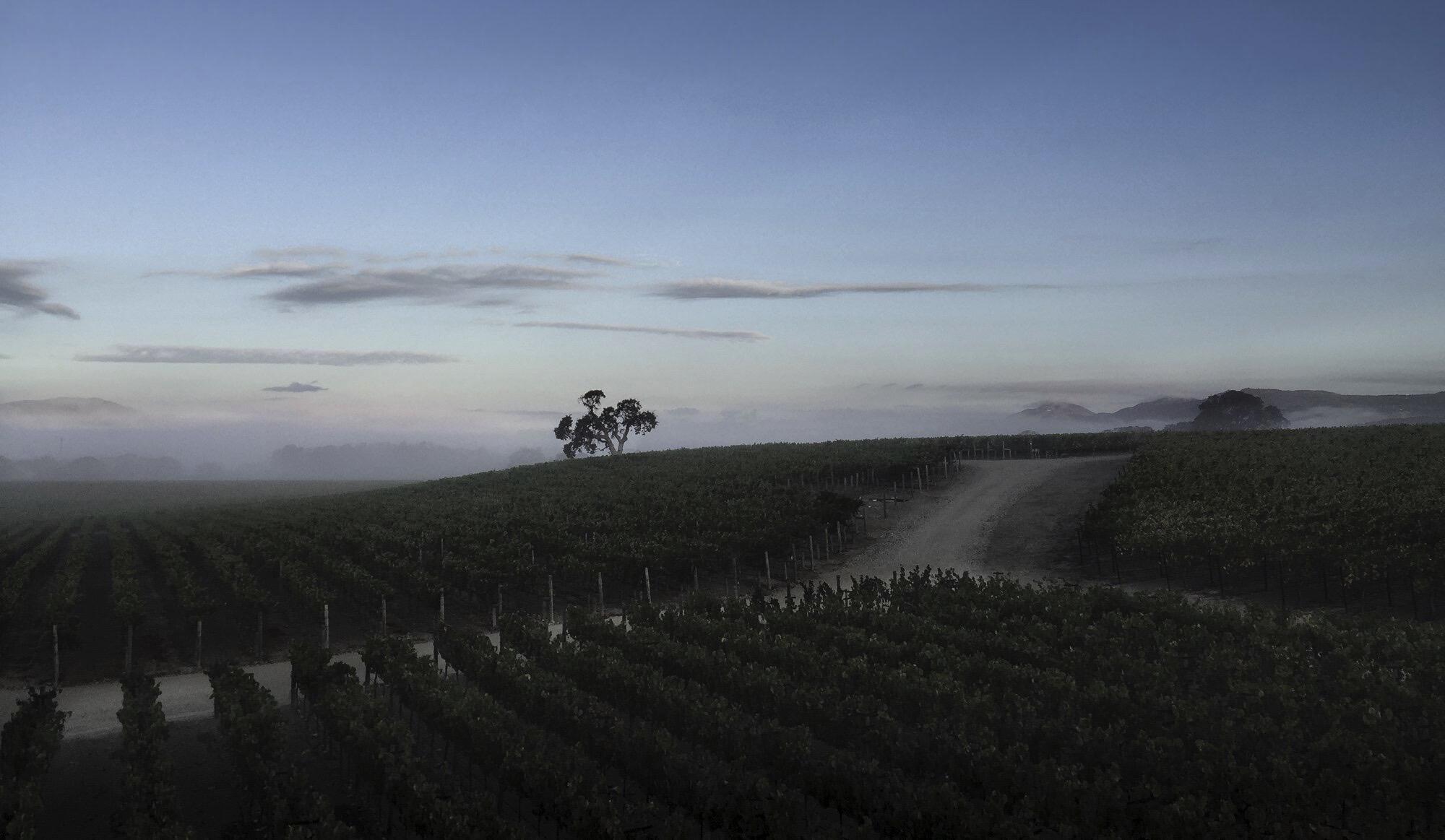 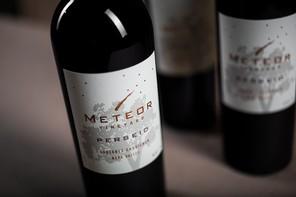 The 2014 Meteor Perseid opens with black cherry, ripe plum, a hit of blackberry and warm fig notes. Baking spices- clove and cinnamon work in concert with smokey cedar and sandalwood to add to the warm fruit characteristics. Barely perceptible earthy notes, reminiscent of juniper and fresh forest floor give weight. Tannins are precocious for a wine so young and are already silky and round- reflecting the 2014 vintage. Elegantly balanced and focused.

Well-drained soils impart depth and minerality to a wine. During the critical maturation period warm, even temperatures allow for leisurely ripening that softens tannins and produces lush, bright fruit. Both of those aspects of a great site are amply evident at Meteor Vineyard. The vineyard possesses another, celestial quality that is uniquely Meteor, something we recognize every time we ferment grapes. It shows up in the wine’s dense but clear violet-edged color, and a trademark Meteor aroma of red cherries and blackberries. The three clones planted on the vineyard make our 100% Meteor Vineyard Cabernet more complex to create, challenging us to find that precise balance between the three vineyard expressions. Then there is always a discovery: in this, our debut year, it’s one of the clones, fermented in barrels from a particular cooper, that made us want to bottle a few cases of something special just for us and a few lucky others. 2014 marked the third consecutive year of drought in Napa Valley. The bulk of the below average rainfall came in February and March, providing adequate soil moisture for the initial push of vine growth in the spring. The bloomtime weather was quite favorable, producing a potentially large crop. This was followed by a very warm growing season, with several fairly severe heat spikes, which Meteor weathered quite well. Great care was taken to open up the canopies to allow good airflow and light penetration, while still protecting the fruit during the extreme heat events. Careful monitoring of the vineyard’s water status led to judicious irrigations in an effort to maintain proper vine balance during the entire season. Crop thinning was performed several times during the season, as is typical at Meteor, but the overall health of the vines still produced an above average sized crop. We were spared any negative impacts of the August 24th earthquake, and harvest took place at night, between September 17th and 22nd. Because of the early start to the season, the fruit had ample time to develop fully, even though harvest came earlier than is typical. The fruit was beautifully mature and well balanced at the time of harvest.

We believe that in the perfect viticultural situations - when the right grapes are planted in the right place - that the best wine that can be made is the one that allows the vineyard to speak clearly and forcefully. The winemaking will therefore be simple and non- interventional, like cooking with the finest fresh ingredients and just allowing the ingredients to shine. That said, our approach is to employ the best of traditional and modern winemaking techniques in teasing out every last ounce of plush fruit and tannin from the grapes. The fruit is harvested when it’s perfectly ripe, generally in late October. Sorting out defective fruit, raisins and sunburned berries is done in the field, and again at the winery to ensure that we’re working with beautiful, perfectly clean grapes. These are lightly crushed and then cold soaked for several days prior to fermentation, allowing the extraction of flavors and colors before the alcohol from fermentation changes the nature of the extraction. As the fermentation heats up, pump-overs, the mixing of the fermentor that submerges the “cap” for optimal extraction, is increased from two to three and than reduced as the fermentation slows. Draining and pressing is based on tasting and our palate for the quality and quantity of the tannins. Only the free run juice is used for Meteor Vineyard wines. The wines go to barrel before malo lactic fermentation, which occurs in the barrel. We use barrels from several coopers: Alain Fouquet, Tarrensaud and D & J are current favorites. The first racking is done after the finish of malolactic and subsequent rackings are performed based on the evolution of the wine. Every stage of growing grapes and making wine contains its own challenges, surprises and rewards. The final blend of Meteor Vineyard wine highlights the strengths of each of the three clones of Cabernet Sauvignon in the vineyard. Meteor Vineyard Perseid Cabernet Sauvignon marries the elements of our clonally diverse planting in one singularly expressive wine. Meteor Vineyard is a collaborative project of vineyard proprietors Barry and Tracy Schuler and longtime Napa Valley winemakers Bill and Dawnine Dyer. Located on a knoll in Napa Valley’s Coombsville appellation, our unique combination of elevation, aspect and stony, rich volcanic soil produces some of Napa Valley’s most distinctive Cabernet Sauvignon. 41% clone 7, 45% clone 4, 14% clone 337 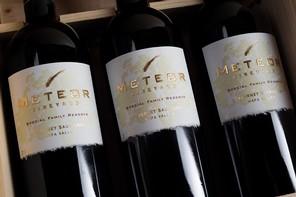